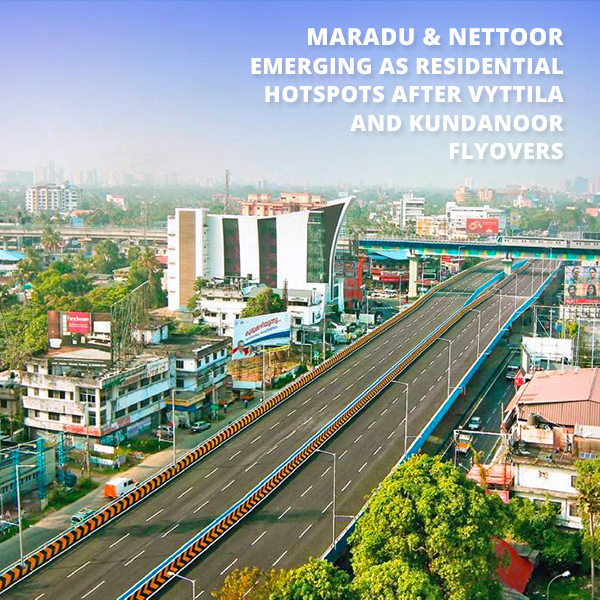 Kochi is a growing city and the residents in Maradu and Nettoor feel happy that the proposed flyovers in Vyttila and Kundanoor are a reality now. Being the most crowded city in Kerala, Kochi has been a vital location for home buyers. Though the traffic was haunting, the need for properties in the heart of the city had never seemed to cease.

Now, the traffic-related chaos is not at all a problem after the inauguration of flyovers, and this has resulted in greater demand for residential plots in the nearest areas.

If you are a home seeker and looking to buy flats in Ernakulam, you might have included Maradu and Nettoor in your list. But, let’s see how these two localities could find a place on the top of your list.

What makes these two places so valuable and desired among buyers?

First of all, Vyttila and Kundanoor are the major traffic interception on national highway -66 which connects the southern and northern districts of the state.

Why should you reside in Maradu?

Maradu is located near the city center and the national highways NH 85, NH 966, NH 66 pass through the region. This helped in the development of the area and the place is well connected by waterways. Maradu municipality is situated close to Kochi and one of the fastest-growing areas of Ernakulam District. The growing city is well resourced with houses, 5-star hotels, automobile showrooms, and shopping malls. The construction of flyovers reduced the intense traffic roadblock and made transportation easier. Flats in Maradu are getting more demand than before after the inauguration of flyovers.

Why should you reside in Nettoor?

Nettoor is a scenic region in Kochi city and around 5 km from Vyttila Junction. The ease of transportation after the inauguration of the flyover. Now traveling is becoming stress-free and you can reach Ernakulam Railway station within 10 minutes. There are many educational institutions near Nettoor and the Lakeshore Hospital and Research Centre are situated in Nettoor. The city is well connected by roads and transportation is available to various parts of Kochi such as Edakochi, Vyttila, Kaloor, Aluva, Edapally, Thevara, and Thrippunithura. Even KSRTC low floor buses available from Nettoor to Cochin International Airport. The railway station is located in the northern part of Nettoor. Life becomes hassle-free when you buy a residential plot in Nettoor.

How Flyovers in Vyttila and Kundanoor increased the residential value?

Both the flyovers at Vyttila and Kundanoor are expected to save a lot of commuting time on NH-66 and reduce major traffic congestion. By playing a major role in solving the traffic blocks in the city, transportation became easier and you can reach anywhere without delay.

Maradu and Nettoor have become the prime residential locations after the inauguration of flyovers and it ensures the development of the national highway. Vyttila is the busiest city near Kochi with an estimated 13,000 vehicles crossing the junction per hour and the traffic block consumes more than 30 minutes for each traveler. As a remedial measure, the government has completed the Vyttila-Kundanoor flyover project.

Flyovers have greatly helped in reducing the traffic congestion and more people showing interest in buying plots near Maradu and Nettoor for setting up residential apartments and flats in Kochi. The prospect of transportation and easy reach to major points in the city increased the value of land and building near the flyovers.